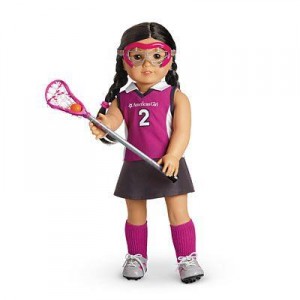 I finally “get” the obsession with The American Girl Doll. It took me a long time. I tried to resist. I was… converted.

I had never been a girly-girl. I was the lone fifth grader playing flag football with the boys while the rest of the girls gossiped on the swings. I was the self-appointed tomboy who showed no interest in dolls of any kind. So, as an adult, I found the overpriced dolls simply another casualty of American consumerism. I snubbed them, equating the overpriced mini-me girls to an unnecessary Hallmark created holiday, like Valentines Day or Secretary’s Day. Clearly, I was a cynical person who didn’t believe in the magic of the dolls.

While enjoying a nice Chianti at one of the outdoor restaurants at The Grove, I’d routinely scorn the dolls as they passed by with their prepubescent owners…watching the throngs of little girls clutching their $150 dollar doppelgängers: A precocious blonde in an eggshell blue dress holding a blonde doll in an eggshell blue dress. An African American stunner in green jumper holding her twin doll. A chubby curly haired sweetie with glasses maternally stroking the hair of her bespectacled look-a-like. I didn’t understand it. I longed for the days of the dimpled Cabbage Patch Doll…. or even the anatomically impossible Barbie. What was happening to this new generation? When had we decided to clone little girls into doll versions of themselves? It was unethical…. It was consumerism at its worst…. it was…. brilliant. Yes, brilliant. Because the minute the American Girl Lacrosse Doll came out, I did an immediate 360. SUDDENLY THERE WAS A MINI ME! A young Colette Freedman! Right down to the athletic calves and undefined arms. The haircolor. The two long braids. The sassy uniform. Granted, I’m approximately four decades too old for this doll, but I didn’t care. I wanted one. A miniature lacrosse player who would remind me of a younger, fitter, healthier, cuter version of myself…replete with cleats, goggles and a mouthguard.