A débutante ball for books 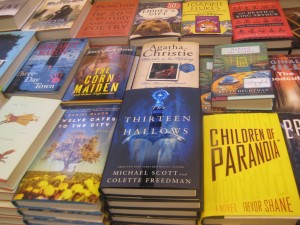 It’s a strange feeling, seeing my book on the New Releases table in Barnes and Noble. And not quite the emotion I was expecting. It was… a bit of a let down. I wonder if débutantes
feel this way: They get all gussied up for the big ball…and then realize that they have to share the spotlight with twenty other glamorous belles.

Today was the big day. At long last, my book was coming out. Making its debut. Being presented to society. The cover was shiny, the content was strong and the interviews were in place. It was ready. And to offer my support, I decided to be its escort… and to visit one of the stores where it would be introduced to society for its formal “début.”
I raced into the store..prepared to see the entire window front filled with the bright blue cover that featured the shiny silver sword; instead,  I saw the book on a small wooden table almost suffocating in the company of a bunch of other new releases. A lonely girl, sitting with other lonely girls waiting to be asked to dance. Granted, it was enjoying wallflower status with the likes of literary giant Joyce Carol Oates and perennial favorite Agatha Christie… but it didn’t feel right. It felt like it demanded to have it’s own table, it’s own signage, it’s own banner saying, “Buy me. I’m special.”  But the cotillion was more like a Sadie Hawkins dance, with a bunch of people just sitting around, unsure of who is really supposed to ask who to dance.

Still…there’s hope….The Hunger Games had its own table…maybe, one day, The Thirteen Hallows will as well.