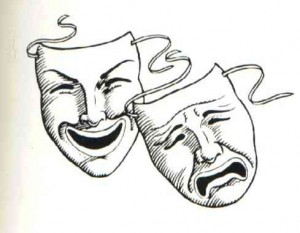 I hate the thought that I’m vincible. And it’s a word. If you can be invincible than you can be vincible.

“Whoever dies with the most money wins, right?” That’s BULLSHIT! When I was little and all the other children had pictures on their walls of Babe Ruth and Steve Austin, portrayed with sensitivity and fortitude by Mr. Lee Majors, I had a picture of William Mulholland tacked up on my bulletin board. Granted, he was vilified in “Chinatown”, but the man was a genius. Frankly, in the same way Hitler was a genius.

(To group)
Great, you hate me now, don’t you? Judgemental fucks. Boo Hoo. I don’t care. News flash. I’m Jewish. Max Zulman. Look, if I met Hitler in a dark alley, even in a light alley, I’d shoot the motherfucker in a nanno second. But I am not negating the fact that the man was a political genius. It’s a formula. Scare the people, offer them a totalitarian option, give them a scapegoat and… voila… mass conformity to an insane ideology… Where was I? Oh yes, Chinatown. So, Mulholland was my hero. I made my first dollar at the age of ten… or was it nine, no, it was ten.
(HE thinks)
Yes, definitely ten. I stole it. Clever little bastard, wasn’t I? There was a man standing next to me at Penn Station and I said to him, “Hey mister, I gotta feed my mom, spare a buck?” He reached into his pocket and handed me a ten spot… right there. Now, my mom had left me years before… it was just me and my brother and my dad and we were doing okay. But I realized that day, there’s a sucker born every second and if I had the know how, I could rob them blind.
(HE begins to laugh)
So, I started a Time Management company. Can you believe that? People pay me to tell them how to manage their time. It’s like selling… air. Or… bottled water.
(beat)
I had plans. I was going… somewhere. It was my destiny.
(HE crushes the cookie)
There is no such thing as destiny.

Note: Zulman is in his 40′s. The monologue is from the play THE LAST FORTUNE COOKIE