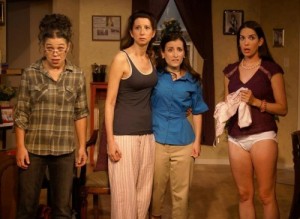 Boy do I love modern plays that incorporate things like Google and iPhones. Add silliness and a character prancing around in men’s underwear and I am all over it.

Carolina (Kim Saunders), Baltimore (Katie Rose Krueger), Dallas (Alexandra Bogorad), and Austin (Darcie Lee Grover) are four sisters from different fathers, different corners of the country, and different perspectives, and they must reunite after their mother’s abrupt death (Shelley Lynn Johnson). What unfolds is a comic but heartfelt look at the ties that really bind.

The playwright, Colette Freedman, has created a masterpiece that appeals to a young, modern audience as well as any age. Director Dale Albright took her story and made it shine onstage with an amazing cast who portray these sisters remarkably.

Grover is outstanding as Austin. She’s comfortable on stage as the chill sister, lounging in her PJs eating Ramen. Austin has many huge emotional transitions, and Grover nails these.

I love Saunders’ portrayal of Carolina. She plays the stuck up lawyer well. Very up tight and from a different world than the others. It’s a relief when she lets her hair down and starts to relax a little. Just like Austin, Carolina has quite a few scenes where she has to go from drinking vodka with her sisters, to extreme emotion. Both of these roles would be difficult for any actor, and you can see that Grover and Saunders have put a lot of work into making these emotions real.

Bogorad is cute as the sister with the “perfect life”. Her character is a little boring, but Bogorad spices it up, especially during the drunken vodka scenes and an outright confession she makes to her sisters, which makes her not seem so perfect afterall.

Krueger is beyond awesome as the free-spirited Baltimore. She is a blast! Funny, outrageous, and huge props for walking around in her underwear for 90% of the play. This actress blew me away!

Johnson takes you into the mind of Mary, the mother, during flashbacks. She does a great job at showing us the sadness and pain of what she was going through before her death and is hilarious at telling the audience of her love for sex. What a vivacious character!