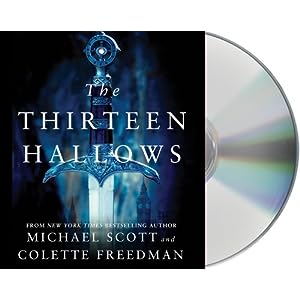 Today, I received my advanced copies of The Thirteen Hallows audio book— Now, audio book is a a misnomer because it’s actually a gorgeous package of nine CD’s. Nine… who knew that “books on tape” could be so long?!!! Eleven hours to be exact. Listening to Kate Reading’s British accent was a pleasure. Her voice is both commanding and mellifluous, a nice combination to draw a listener in.

Here is more information from a reprinted article from Monster Librarian.

By Michael Scott and Colette Freedman

The Thirteen Hallows has already garnered strong pre-publication buzz, including Publishers Weekly which raved “relentless pacing and a richly detailed story line replete with historical references and bombshell revelations give this fantasy tremendous mainstream crossover potential.” Narrating is Kate Reading, best known for her work on The Wheel of Time series, as well as the on Boneshaker, The Way of Kings and Bright-Sided, for which she won an AudioFile Earphones Award and the 2010 Best Voice in Biography & Culture. As she did in her previous work, Reading brings this story of modern-day monsters to life.

The Hallows. Ancient artifacts imbued with a primal and deadly power. But are they protectors of this world, or the keys to its destruction? For decades, the Keepers guarded these Hallows, keeping them safe and hidden and apart from each other. But now the Keepers are being brutally murdered, their prizes stolen, the ancient objects bathed in their blood. Now, only a few remain.

With her dying breath, one of the Keepers convinces Sarah Miller, a practical stranger, to deliver her Hallow—a broken sword with devastating powers—to her American nephew, Owen. The duo quickly become suspects in a series of murders as they are chased by both the police and the sadistic Dark Man and his nubile mistress.

As Sarah and Owen search for the surviving Keepers, they unravel the deadly secret the Keepers were charged to protect. The mystery leads Sarah and Owen on a cat-and-mouse chase through England and Wales, and history itself, as they discover that the sword may be the only thing standing between the world… and a horror beyond imagining.

Published simultaneously with the print edition from Tor