Down the Rabbit Hole – a poem about finding hope

Last night, was my last grief group. Apparently, sanctioned grief is only supposed to last for 18 months…at least that’s what the experts say. And the experts aren’t necessarily wrong… although the grief continues… it just changes course. Joining a grief group was one of the best things I did because it enabled me to meet people who were on a very similar journey, it allowed me to open up my heart to strangers who understood, it allowed me company as I navigated  uncharted territory. Every other week for 18 months, we would close each grief group with a poem. A random grief poem…some good, some not so good. And I, naturally, after twenty odd poems thought “I can do better”. So, I did. I wrote this poem… for the survivors. For the 8 people I spent the last 18 months with. For the random strangers who are now steadfast friends.

DOWN THE RABBIT HOLE

Like an earthquake, Grief shakes you when you least expect it; throwing you off center and rattling the core of your very being.

Like a tsunami, grief washes over you; flooding your entire body and soaking you both inside and out.

Like a hurricane, Grief blows you so far off course so that you’re barely hanging on by the tips of your fingers.

Grief is the biggest disaster of all because FEMA can’t come in and clean it up.

Grief trumps earthquakes because you will feel its aftershocks your entire life. You don’t know when they’re coming and they are both paralytic and terrifying. 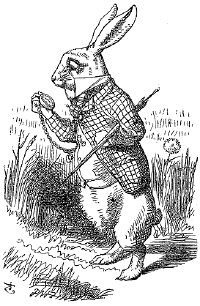 Grief drops more rainfall than tsunamis because once the floodgates have been opened, the tears refuse to stop falling.

And unlike global warming, they are triggered by something as simple as a smell, a word, a song.

Grief blows harder than a hurricane because you will never quite find your center again. There is now a piece of you which is missing and no matter how much you try to over compensate, you will always have a limp in your heart.

Once you go down the rabbit hole of grief, you have no idea how and when you will get out. It is a destination in which you can’t use a compass. It is a place you can’t lookup on Google Maps.

It is off the grid.

Yet, unlike Alice, you are not alone. Others are also falling, and together, you will learn to navigate the course.

You will discover the nooks and crannies.

You will become cartographers of the uncharted territory.

They’ve been shaken by that same cataclysmic earthquake.

They’ve been drenched by that same devastating tsunami.

They’ve been blown off kilter by that same destructive hurricane

(note. “Grief management” liked the poem so much, it’s now officially in their repertoire)