I went to a doughnut wedding and… 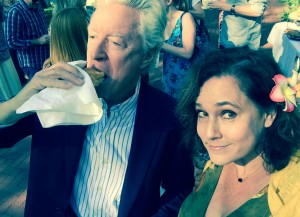 I went to a doughnut wedding.

I went to a doughnut wedding and I’m on a super intense, discipline driven boot camp program where I’m not supposed to eat carbs. Now, let’s get something straight…I love carbs. I love carbs so much that I could marry carbs. But I wouldn’t have a doughnut wedding, I would have a pizza wedding. In fact, I would get married to a pizza. An Anchovy and Garlic pizza and I would cheat on it a few times a week with lightly toasted onion bagels, cream cheese and lox. I’d be a huge food adulterer as I pretty much love anything with flour, sugar, cheese and, of course,  wine.

Wine would definitely be my mistress. Or Macaroni and Cheese. Or doughnuts.

Because I love doughnuts. For better or for worse. Til death do us part. I’m not even a hoity toity Krispy Kreme girl, I’ll take Entenmanns, Little Debbies, Hostess. I’ll even go into Albertson’s and buy a single doughnut for $1.39.

My last book, The Affair, started with the heroine eating an entire bag of doughnettes as she wrote Xmas Cards. That heroine was me. Is me. I have actually spent 45 minutes at Dunkin’ Doughnuts choosing the perfect bakers dozen to take home. I usually end up with three old fashioned, two chocolate glazed, two jelly, one sugar, one Boston Creme, one sprinkles and three crullers. Forget the fact that doughnuts have between 300 and 400 calories. I could EASILY polish off two or three at a time.

And don’t even get me started on doughnut holes…. 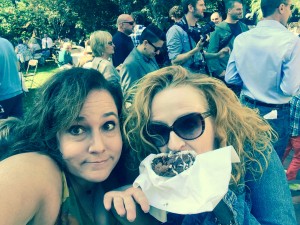 So, I went to a doughnut wedding and I couldn’t eat the doughnuts. There were piles of them. Colorful piles of freshly fried dough, beckoning to me, whispering under their breath, “Eat me. C’mon. Just do it. You know you want to.” And I did. I did want to. But I also wanted to prove to myself that I could stick with this godforsaken program. And I didn’t want to disappoint the world’s best trainer as I have major “gotta be the best one on the team” issues from years of playing highly competitive high school and college sports.

So, instead of eating the doughnuts, I took pictures of them. My sick, masochistic way of vicariously enjoying others getting to eat the doughnuts. Sure, I was bitter. But when you’re eating 1,200 calories a day, exercising your butt off and not allowed to eat anchovy and garlic pizza, onion bagels cream cheese and lox, macaroni and cheese… and doughnuts, you’re allowed to be bitter. 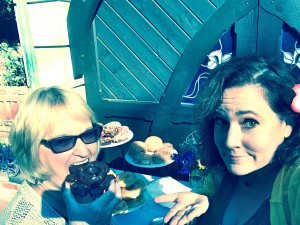 After all, it’s calorie free.