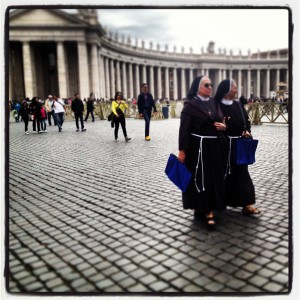 My favorite thing to do when I vist the Vatican is nun watch. But after my college roommate waited 45 minutes while I pretended I was Maria in The Sound of Music, she was ready to do something a bit more…cultural. So we went to the Vatican museum. I thought it could be enlightening.  After all, it was three in the afternoon, the school groups would be long gone and I thought that I would have time to quietly observe, reflect and digest the museum’s riches.

Somehow, every single tourist in Rome seemed to descend on the Vatican museum at 3pm and I spent most of the sardine packed tour sandwiched between a perky loud Japanese tour guide and an even perkier and louder Taiwanese tour guide. I thought I lost them in the 12th identical room of gorgeous biblical murals when I ducked out a side door marked toilet; yet, upon my return a few minutes later,  they were eagerly waiting for me and we continued our pilgrimage through 55 halls of maps, tapestries, murals and sculptures en route to the Sistine Chapel.

Let’s be honest, that’s what it’s all about. Everyone wants to get to the chapel, look up and say, “Wow. Cross that off the bucket list.”

And it’s admittedly impressive. Michelangelo was brilliant and his mural is gorgeous. But enduring two claustrophobic hours listening to competing Asian languages to get there is is a lot to ask. But I was patient. I endured. I tried not to be bitter about how many Nuns I was missing outside. And my patience was rewarded because  just as we were getting to the chapel, taking the last few stairs up, things looked up as a guard said, “Silenzio. No photos.”

Finally, I could enjoy the art in peace amid silent art connoisseurs appreciating Michelangelo’s majesty. Yet, sitting in the chapel alongside my tour groups and the other five hundred people, it was anything but silent. Rather, it was the bored guard repeating, “Quiet. No photos. Silenzio. No pictures. You cannot light up in here, sir.”

Yes, not one, but six people during the brief respite I spent in the chapel, tried to light up. I guess they thought, hey…it’s quiet time, I can relax with a little ciggie. 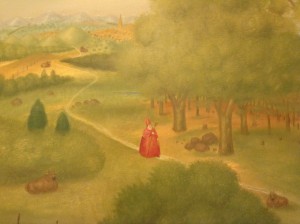 Cigarettes, Asian tour guides and claustrophobia aside, the highlight of the tour was not seeing the fingers of God’s touch transfer the breath of life to Adam in the ceiling’s center panel. The highlight of the tour was finding a Botero tucked away in a corner that NO ONE STOPPED TO LOOK AT. Everyone was so focused on their quest to see the Chapel, they forgot to look at the beauty en route. And one of my favorite painters of all time, Fernando Botero, has a large piece tucked away in a corner. True, it wasn’t one of his signature ironic or humorous pieces. And it didn’t depict his signature sexy robust women dancing or undressing. It was of the pope. Naturally.

Botero’s painting depicts a plump Pope strolling along a gorgeous countryside. And as I gazed at the painting in complete privacy,  I realized that maybe Botero’s intended irony comes not in the form of his painting, but from its placement. A pictorial pope in the real pope‘s backyard, tucked away in a corner offering a bit of peace and respite from the prying eyes of needy tourists.

And the best part was that the only other person who ducked around the corner to join my appreciation of  Botero…was a nun.