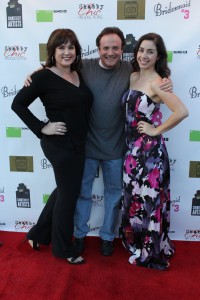 I had my second “Step and Repeat” experience in less than a month with the screening of my film Bridesmaid#3. I thought I was set. I had my 4″ heels… I was dressed in slimming black…. I…. I…. I forgot the most important thing…. if you pose with actors who are half your size… the heels and the shoes just don’t matter. Still, I wrote the film and it was well received. And…  in the end… that’s what really matters…doesn’t it?!

Because standing on a red carpet for a film I wrote is a pretty amazing feeling!

Posing with the film’s stars Danny Lippin and Jessica Noboa