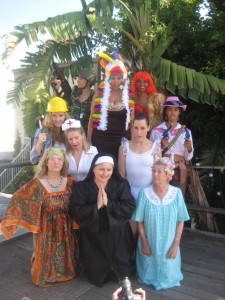 For the last three years, I’ve spent most of my time at my computer writing. I got used to the solitude and became one of “those women” who wears yoga pants every day but does not do yoga. Oye.

Once upon a time, I directed commercials. It was a terrific gig and although I wasn’t as passionate about it as writing and acting, I was good at it and produced some great material. The last commercial I directed was four years ago (ironically, it was also a Presidential themed commercial).

Last week, I got sucked back into the directing world…and it was one of the best experiences of my life. Directing a campy Obama campaign to the Village People‘s cult hit Y.M.C.A. was a blast. Shot lists, camera angles, working with actors…the skills all came flooding back and I was introduced to a coterie of fabulous women, led by the indomitable Pippa Hinchley. These are some of the hardest working women in show business and we shot the video in less than eight hours and begged, borrowed and stole everything in our attempt to create art for no money. And to make our small contribution to the campaign.

I know this Presidential race will be close. Last night’s exhausting debate proved that. I know, as a woman, there is not even an option between the candidates. Simply said: I want a President who respects my rights as a woman to choose. And although I am not in the financial position to give 50k dollar a plate fundraising dinners, I was in a position to do a pro bono Obama video, which I hope will entertain, inform and influence people to go out and vote.