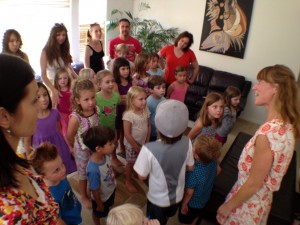 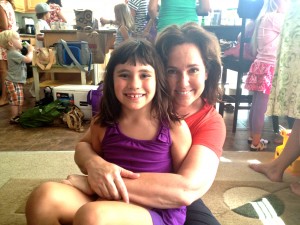 30+ kids and I sang on Nickella Dee‘s smart, funny, creative kids’ album ME LIKE ME.

For the last two weeks, I’ve been religiously memorizing my part in the car.

Billy Joel and NPR were replaced with songs about Captain Billy Bobo and Road Trip MiniVan. Being the only non-parent in the room, I was an anomaly… a big kid who was kidless and therefore a fascination to the under ten crowd. I had a blast. When the kids were each bribed with an oreo between songs two and three to keep up their energy…. I was third in line.  When the kids got stickers between songs six and seven to boost their morale, I ended up with a monkey and a flower. After all, I was an accepted part of the gang.  I was devoted member of the group. I was one of them.

It was only when the adults broke for beers during the lunch break, that I switched my allegiance.