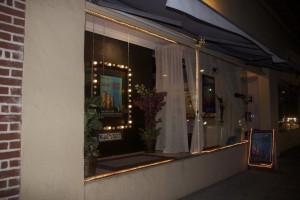 Tonight I saw the eleventh production of Sister Cities… and I was not disappointed. It’s still amazing to me that six years ago, I created these characters in my mind and they continue to not only live on, but thrive. As a playwright, it also fascinates me that I specifically painted their personalities, gave them witty repartee and conflict and backstory and then… was able to let go.

This is the first production I’ve ever seen where I actually had nothing to do with the show… and I was most impressed. The five actresses embraced the characters beautifully…. each embodying  elements of the original actresses who played the roles as well as bringing their own quirky personalities and über smart takes to the complex roles.

Some playwrights are quite nervous when they see their work on stage… and, sometimes, I am too; however, because I know this play works…I was able to completely relax and smile and giggle and laugh and guffaw and tear up with the rest of the audience. The director did a terrific job with pacing (my biggest pet peeve is when my plays are done too slowly) as well as carving out the important moments, juggling the comedy and pathos and moving the talented actresses over the stage with both organic and motivated movement. The nicely constructed set made me believe that I was in Mary Baxter’s house and both the costumes and lack thereof sold the story perfectly. The emotional flashback scene was beautifully acted and most of the audience whom I got to chat with after the play specifically wanted to discuss that scene (as well as the climactic scene which precedes it).

Overall, it was a really lovely evening and Dragon Productions did Sister Cities proud.

Thank you Alexandra, Darcie, Katie, Kim, Shelley, Dale, Kim, Jeffrey, Jason, Meredith and everyone who made the show so spectacular.