Sophomore Slump. My second triathlon and why carbo loading with wine does not work

My first tri was amazing. I set a goal and I reached it. My naiveté fueled me, my exuberance sustained me and my training prepared me.

My second tri wasn’t as successful.

I can sum up the experience with the F expletive. I muttered it several times throughout the race. In the murky lake water where the seaweed all but attacked me, on the hilly bike course which promised to be flat and on the run where the temperatures soared.

So I cursed. Several times.  And about 33 F’s later, I crossed the finish line….broken and battered…but I finished. I got a medal and the bragging rights of finishing not one but two triathlons.

And with two triathlons under my belt and a third one in December to fill the trifecta, I have learned a few things.

1. Carboloading with wine does not work. It tastes good…it tastes really good; however, it doesn’t quite prepare you as well as the more traditional pre-race meals.

2. Never trust the event’s brochure.  This is my second ‘flat’ triathlon which has been hilly. Maybe whoever writes the copy doesn’t quite understand the difference between the word flat and hill. A hill is an incline, slope, gradient,ramp, rise…it means it goes up. Flat is anything which is level and horizontal. Both courses had a lot of vertical in them. And I am not a big fan of vertical.

3. If you train in a beautiful Burbank Olympic sized pool, which is clean and uncrowded, you are ill equipped to do a triathlon in a lake.  A dark lake. A murky lake. A muddy lake where seaweed seems to grab your arms and legs, you can’t see anything and the water smells.

4. Triathlon is spelled triathlon. Not triathalon…it took me a while to catch on to that one. 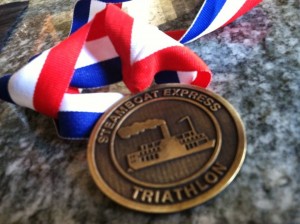 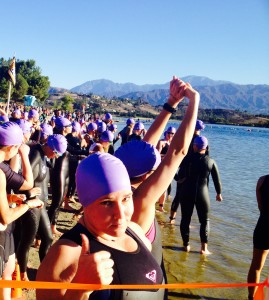