The 2011 Aids LifeCycle… a reflection… days five, six and seven (of seven) 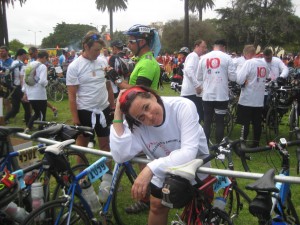 Day Five...RED DRESS DAY. Everyone wore red. And most of the gay guys wore tight red dresses…sequins, pantyhose, wigs… the whole nine yards.  And most of them, with their lithe, perfect, model-esque bodies looked much better than women in dresses. It was a short day of riding (the rest of the days were 70-100 miles) this day was 45. This was because of the hills, the nonstop hills. Up and Up and Up and Up. Still thought about quitting the entire time, although I didn’t want to ruin my PR as the ‘badass chick with the black eye and the stitches, so I kept going. And the good thing was that we got to camp at 2 (other days it was between 6 and 7). After getting massages (everyone in camp was allotted one 20 minute massage at some point during the ride), we grabbed a cab and went into downtown Lompac, where we had AMAZING Italian food. And the two glasses of red wine eased the muscle soreness a wee bit. Seems like half of the ride had the same idea because the place was packed.

Day Six… THE NEVER ENDING DAY. 90 miles, which just went on and on and on and on. I really thought on the ride I’d be coming up with brilliant ideas, be creatively inspired, work on my projects and be incredibly productive…instead….I literally spent every minute on the ride planning when I was going to quit. It’s this incredible mind fuck which messes with you, but once you go down the rabbit hole, you can’t get out. And the irony is that I finished every single mile (except the day I went down). Go figure. The smells on day six were fabulous: the lavender and eucalyptus, the pine, the salty ocean air…it was a potpourri of everything. I got my first flat which happened on a side road, rather than on the 101, thank goodness (it felt like about 1/10 of the ride was on the 101– and riding  next to enormous MAC trucks can be intimidating). Santa Barbara was pretty and there was an ice cream stop organized by the community. And the sugar high definitely helped propel me through the latter half of the day. But the best part of the day is that my friend, who lives in a gorgeous home in Ojai, picked me up at six and let me spend the night at his place. After a clean shower (it is IMPOSSIBLE to get clean when you’re camping) and a home cooked meal…as well as a few glasses of wine, it was LOVELY to sleep in a warm bed. I now know why so many people ‘princess’…which means stay in hotels rather than camp…because when you wake up with a warm core, you are a MUCH more effective rider. Therefore…

Day Seven… THE BEST DAY. After waking up in Ojai, eating a delicious breakfast and real coffee (rather than the watered down crap served in huge vats), we were dropped off at camp and, literally, jumped on our bikes and went. Usually, I average 12mph on straight-a-ways, 5mph up hills and 22-30mph downhills. But  12mph on flats is pretty standard. Well rested and well fed, I rode the first 20 miles from the camp in Ventura to the first rest stop at 23mph. IT FELT AMAZING. Because I was already warm, I didn’t struggle in the beginning of the day like I usually did. I didn’t fantasize about stopping like I usually did. I just rode. And it was fabulous. The ride was mostly along the coast and I saw dolphins, just north of Malibu, and people started to really come out and cheer and clap on the side of the road. By the time I climbed the last big hill, there were groups of people cheering and I became quite emotional. The last few miles to the Veterans hospital were filled with supporters and riding into the finish line, with hundreds of folks cheering was incredibly rewarding. Jane Lynch, of Glee fame spoke at the closing ceremonies, I cried (of course) as the positive peds walked an empty bike down the main aisle, representing people who have died of AIDS and couldn’t be there. The greatest part of the ride is that the combined 3,000+ cyclists and roadies (support team) raised over 13 million dollars for AIDS research. A record.

I am physically numbed, bruised and a bit broken. But I did it.