The girl who is popular… with dogs 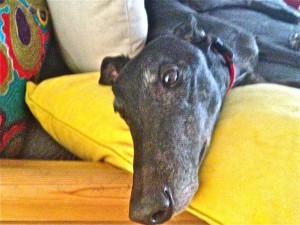 Today, I was walking my dogs and we met a heavyset teen whose entire face lit up when she saw my greyhounds.

Our morning route is near a high school and I often pass this girl whose solitary journey to school makes her stand out among the groups of teens in front of and behind her. Like wolves, teenagers generally walk in protective packs.   While the thin, pretty, dynamic, well dressed girls walk in twos and threes and sixes, this girl is always alone. Always. She dresses in unflattering oversized shirts and cut off jeans that are seven seasons too old. Her eyes are usually cast downwards as if she is screaming to the world, “I am invisible.” Yet, when our paths cross, she always stops to pet the dogs. Always. She’s quite shy and clearly more comfortable with animals than people so we keep our salutations to a minimum as the dogs lick her and sniff her and bond with her.

Today, was our first actual conversation and I broached the silence with, “They really like you.”

To which she responded, “Yeah, I’m popular… with dogs.” She used the ellipses to her advantage and punched the word dogs a little too aggressively, not even pretending to hide the sarcasm and pain in her voice.

There were so many things I wanted to say to her, most of all It gets better: a phrase coined to help the LGBT youth, but really should apply to all youth. To all struggling people who aren’t yet comfortable with their identity in this world. I wanted to tell her, “Those skinny bitches in their packs of twos and threes will be pregnant, divorced and jobless within ten years while you go on to college and a career and life where you can rewrite your history and start anew.” I wanted to say, “High school sucks and you just have to wait it out for the next two, three or four years and then you’ll be free.”

But who was I to talk? In high school, I was neither popular nor an outsider, just someone who comfortably navigated her way through the maelstrom of hormonal changes and survived. I was like the narrator in a Judy Blume novel, someone who observed the fray and neither suffered too badly from the mean girls nor was a mean girl myself. I (gasp) liked high school because I found my niche, my friends, my passions and I explored them.

I wanted to give advice and comfort and attention to this loner who is only popular with dogs. Instead, I smiled at her and told her to have a good day.