What it means to be a woman writer in America 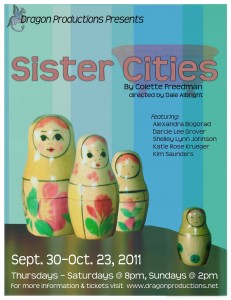 With Dragon Production’s opening of Sister Cities this Friday, in Palo Alto, I thought I’d reprint part of an interview I did with Dragon’s  Artist in Residence, Jeffrey Lo.

Jeffrey: Hi Colette. Can you tell us briefly about your writing background? At what age do you think the writing seeds were planted into your brain and when did you realize you wanted to start taking it seriously?

Colette: The first play I ever wrote was in fifth grade when I penned my eleven year old masterpiece, An Archie Bunker Thanksgiving. Okay, I realize that totally dates me, but it was a fun play with every kid in the class playing a 70’s sitcom character. And it was a big class, so one of the families coming to dinner at the Bunker’s ended up being the entire clan from Eight is Enough. I was in a Jewish youth group and used to write plays for them as well. But I had always leaned more towards acting than writing. I moved to Los Angeles to pursue my acting dream and, along the way, discovered a lack of great women’s parts in the theatre. After Chekhov and Shakespeare and Ibsen – yes I’m a classics snob – I felt left out. I didn’t have a voice as an actress… so I started to write my own plays. At first I did them under a pseudonym (Naomi Lefkowitz for those who are interested), but as soon as people started to want to produce them, I came forward. And I haven’t turned back. I still love acting and find that sometimes I’m better discovering characters as a writer from the inside out, I originated Austin in Sister Cities, but now I’ve turned to novels and screenplays so I’m constantly learning and expanding as well.

Jeffrey: That’s great! Why did you originally write under a pseudonym and how was it when theaters began contacting you with interest in producing your work?

Colette: I wrote under a pseudonym because I was working with a great theatre company called Circus Theatricals and I wanted my work judged fairly. We had a ten minute play festival and I was on the reading committee. So many of the plays were crap that I decided to write one myself. It was called First to the Egg and was about a nerdy sperm convincing a self-important egg that he was ‘the one’. Everyone loved it and it was my first professionally produced play. After that, the company’s artistic director, Jack Stehlin, was very generous producing my work and he produced several of my shows. We’re still in touch and he actually just commissioned me to do a modern film adaptation of Uncle Vanya for him so it all comes around – Chekhov to Chekhov!

Jeffrey: So at what point did you start writing full lengths and how did Sister Cities come about?

Colette: I wrote Sister Cities in 2005 because my best friend, Jill Gascoine, who was a famous actress in England, told me that she was retiring from acting and would not act again unless she played a corpse. So I started with the idea that I needed to write a play about a corpse which made me give the corpse a back story and a family. I had an aunt with ALS (more commonly known as Lou Gehrig’s disease) and always thought it would be one of the most tragic ways to die. Also, I love writing female characters, so I gave her four very different daughters who don’t like each other very much; yet, must come together to fulfill their mother’s wishes. Before Sister Cities I wrote two full length plays which were produced: Iphigenia in Aulis, which was a modern day adaptation and Deconstructing the Torah.

Jeffrey: When you were acting in the first production of Sister Cities, what are some things that you discovered during the process?

Colette: How much fun it was! As a writer, you observe everything. You watch and you listen; yet, as an actress smack dab in the middle of it, I got to use my other senses too: taste, touch, smell. It informed the character of Austin and, in turn, informed the play.

Jeffrey: Looking through the Sister Cities website, performing the play at the 2008 Edinburgh Fringe Festival seemed like a real blast. How did the idea to bring it to Edinburgh come about and how was the overall experience?

Colette: The Edinburgh Festival was, by far, one of the best experiences of my life. I strongly recommend it to any writer, actor, director, producer – anyone involved in the theatre. I had acted in a few plays with Sidewalk Studio Theatre and the guys who ran it, Kurt and Marc, absolutely loved Sister Cities and wanted to take the play there. So, the entire original cast… plus the NYC Dallas went and it was amazing. I cut the play down to an hour. All of the plays had a 10 minute load in, 55 minute run and 10 minute load out, talk about guerilla theatre!

We performed for 30 days straight from 6:45 to 7:45. We performed at The Gilded Balloon, which was mostly a comedy house; however, we got great audiences for being a play. Five star reviews. The rest of the time we saw loads of theatre, met some amazing people, took in the sites and took full advantage of the bar/social scene. It was a different world there and I want to go back.

Jeffrey: Earlier this season, Dragon produced Theresa Rebeck‘s Bad Dates. At around the same time – her great keynote speech regarding women playwrights was getting a lot of attention. Can you tell us a little bit about your early experiences about being a female playwright and if you feel your gender is still making a difference when trying to get your work produced today?

Colette: I loved Rebeck’s speech regarding women playwrights; however, I’m a big fan of producing the best theatre out there, no matter which gender writes it. I make it a point to try to nurture young women playwrights because, frankly, I think the problem is that there are not enough of them. There’s always been a huge gender disparity in Hollywood: women screenwriters, TV directors, executives, etc. So the fact that there are so few produced women playwrights doesn’t surprise me, and it doesn’t depress me; rather, it inspires me to work harder and try to make my plays as good as possible so that it is impossible NOT to produce them.