When I’m angry, I paint

I started painting in ’96. I had just lost the lead in a play to a spectacularly untalented actress whom the director was screwing. It was a huge loss of illusion for someone who genuinely thought the magical world of theatre was a meritocracy.  I was devastated, I was heartbroken, I was… young. Oh so very young. I couldn’t cope with my emotions, so I cried for three days. I w 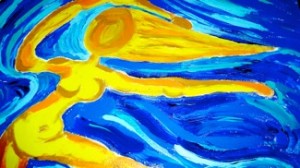 ailed against the hypocrisy of the world and perfected the petulant pout.

I was angry, I was selfish.  I was a pain in the ass to be around.

And then something motivated me to start painting. Some muse who had been sleeping deep in the recesses of my mind was awakened, probably by the spoiled, whiny kid who didn’t get the lead in the play. And the muse inspired me to paint. And I did. I poured all of my anger, sadness and fear into that painting. All of my hatred, fury, and frustration at the deep injustice which had been perpetrated…. all made its way into the canvas.

Now, sixteen years later, I still paint when I’m mad. It is my creative weapon to brandish against the world’s cruelty.

Plus, it’s a lot less caloric  than downing a tub of Ben and Jerry’s and a bottle of Malbec.