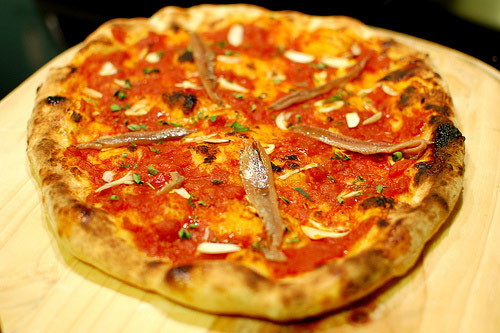 The core philosophy of yoga is to listen to what your body needs and to still your mind. I have never been good at either one of those. Because every time I listen to my body, it wants anchovy pizza and every time I try to still my mind, it tries to figure out what kind of anchovy pizza I want. The local Italian place on my corner is a terrific mom and pop place and you can’t beat the convenience; however, the thin crust is a little too thin and the thick crust is too doughy. And that is what my stilled mind focuses on. Not world peace, not global warming… anchovy pizza.

One of my oldest and dearest friends is visiting me. She is a yogi. She owns a yoga studio. She’s fit. She’s zen. So, naturally, she wanted to check out the local yoga scene. And I was determined to be mindful. To listen to my body. To not think about anchovy pizza. Breathe in and breathe out. Having recently embarked on my own journey to fitness two and a half months ago, I am getting physically stronger. I can now do plank and chatarunga. I am a pro at Savasana. Which, incidentally, sounds like vichyssoise. I love Vichyssoise. Several years ago, I was walking in the village in New York and it started to rain. In order to avoid buying a $15 umbrella, I popped into a restaurant and bought a $20 bowl of soup. It was one of those restaurants which is in the basement of a non-descript brownstone and I had the best Vichyssoise ever. A thick hot soup of onions, potatoes, puréed leeks and cream. I can still taste that soup. So every time the teacher says Savasana, I think about Vichyssoise. And every time she tells me listen to what my body needs, I think about anchovy pizza. Focus, Breathe in, breathe out. I understand why yoga is a practice…because you definitely need to practice it to “get it”. And, I’m not sure I get it. I like it, but I don’t get it. Because my mind is too busy to still.

Determined not to think about anchovy pizza, I pretended I was Katniss Everdeen during warrior pose. During tree pose, I pretended I was on Survivor gunning to get the immunity necklace. I tried to be mindful during each pose but when my stomach grumbled, it kept going back to the pizza. It was about halfway through the class when I had a revelation, an epiphany, an enlightenment. It was ten o’clock in the morning. It was way too early to be obsessing over anchovy pizza.

For the rest of class, my body told me it needed French Toast.