An obit to my soon to be dead dog 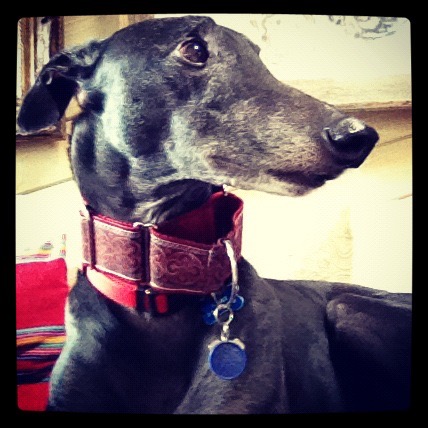 I have always believed in death with dignity. I wrote a play about it. I have seen too many people suffer unnecessarily because of the law and the selfishness of those who prolong their compromised quality of life. And now, I’m having to stand behind my convictions. And it sucks. My beloved dog, my first pet and the greatest animal I have ever known has osteosarcoma and is at the point where he can no longer walk. He is an 11 1/2 year old greyhound and I have had the honor of being his mom for the last seven years. And my heart is eviscerated because I know he is starting to suffer and I know that it is up to me, with the help of a qualified vet, to end his suffering. And the qualified vet is on standby, ready to come in the next hour, the next day, the next week to relieve him of his pain. And I know I have to do it. And I know it is absolutely unequivocally the right thing to do. But that does not make it hurt any less. Because, right now, as my brave boy lays in my lap, and looks at me with his gorgeous chocolate eyes, every memory I’ve ever had with him comes rushing back. Every piece of food he has stolen…every smelly fart he’s cleared a room with…every person he has affected: the stolen food, the smelly farts, the lives affected….all too many to count. We adopted Moses Groucho Hamlet Zelda Von Freedman-Troy on June 22, 2008. A sleek black champion racer, he stole our hearts immediately. And the last seven years with him….the first 4 1/2 with my partner, the last 2 1/2 without have been extraordinary. Moses has been my rock through the good, the bad, the truly terrible and the magically exceptional. Throughout it all, he has been an elegant gentleman (yes, despite the farts and the food thievery, he is still a true gentleman). And after spending the first half of his life winning every race he ran and the second part of his life being loved beyond compare, this gentleman is ready to go. With his dignity intact.