The sense of loss: the same in both theatre and sports 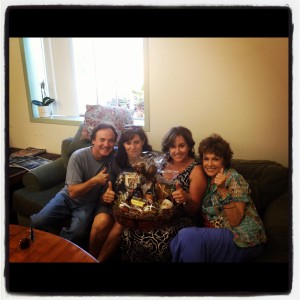 I’ll never forget the feeling of standing in the tiny purple Pikesville High School Varsity locker room after my last high school lacrosse game. Despite the stink of sweat in the close quarters and the loud sounds of fourteen teenagers jabbering away, all I could feel was pain. The sense of loss was overwhelming: We had just won our championship game, but I was completely devastated.  It was over. I would never again play with Kim, Cindy and Michelle. I would never again play for Ms. Schaefer. I was retiring the number thirty three…until college, when the journey would start all over again and be even more wonderful. Yet, at that moment of complete and utter loss… I couldn’t think about the future, only the past and the friends I had made, the camaraderie I had shared and the highs and lows of the games in which I had played.

Sports is a lot like theatre…it’s simply a different vernacular. Games are Plays. Half time is Intermission. Fans are Audiences and Teammates are Cast Mates. Having just finished a run in the play Anxiety, I am truly devastated and, forgive the pun, having an anxiety based withdrawal. The show was terrific and like lacrosse, I got to play both solid offense and defense, both supporting my cast and scoring some laughs. I was rarely on the bench, in the midst of the action and helping my team towards a win by entertaining the audiences. And as I stood in the Odyssey Theatre dressing room yesterday, collecting my opening night cards and closing night flowers, I felt the same strong sense of loss as I did in the locker room those decades ago. Sure, there will be plenty of other shows…but this show, this cast, this set of rehearsals, audiences and experiences will never be the same.

Back then, I drowned my sorrows in Baskin Robbins. Now, I have wine.