Why I love collaborating

Once upon a time I was a die hard athlete and I purposely chose to play team sports.

I thrived on the competition more when I had teammates to share in the intense highs of the victories… and the painful stings of the losses. So, it was only natural when I transitioned from sports to writing that I would want to work with teammates.

Making Miles Underwater was a team effort from the brilliant trio of producers all the way down to the committed throng of student volunteers.

Yet before any of that began…it was a script.

An article about me just came out by my alma mater Haverford College. Anne Stein did a terrific job capturing my apparently “cheery” voice, pulling no punches when I admitted Burbank wasn’t sexy and zoning in on my obsession of working with collaborators.

Here’s the thing about working with a partner, you have to trust him or her completely. You are getting into bed together on a project whose life will be longer than yours. Much longer.

Bands break up and don’t make great music because bandmates squabble, marriages break up because people aren’t willing to put in the work and many writing teams have the same fate of broken marriages and broken bands.I have had the great fortune of working with a slew of amazing partners. Some on one project and some on several. I feel like the luckiest person in the world because I have worked with some of the best and most generous collaborators ever on everything from scripts to books to plays to musicals: Michael Scott, Steve Dorff, Sadie Turner, Savannah Bloch, Nickella Dee, Nick Mize, Tony Glazer, Catie Costa, Kimberly Much,  Mark Troy and Brooke Purdy. 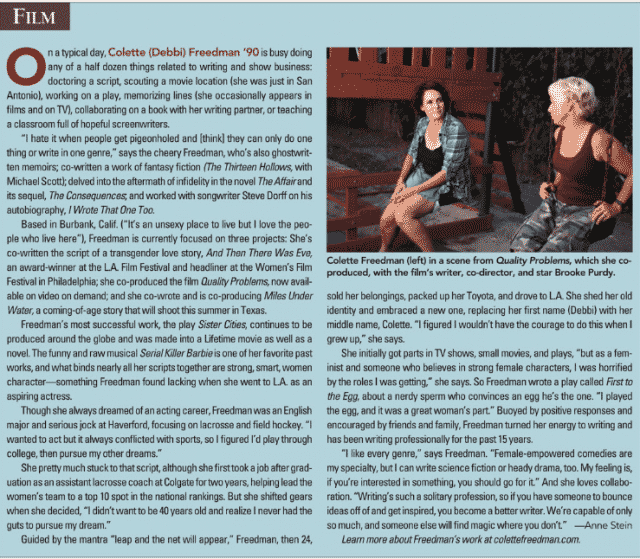 My current and hopefully forever writing partner Brooke Purdy is the best of all worlds: She is ridiculously funny, crazy fast, scarily talented and we “get” each other. To write with someone, you MUST “get” them. It is non negotiable. Everyone has extremely different personalities and writing styles and the best collaborations are when you do your bit and when you need to throw up the white flag or hand off the baton –  your partner grabs it and runs with it as fast as you do. Whether it’s punching up each other’s work, taking turns on scenes, crafting structure and story or just bouncing ideas off of each other, a true collaboration is one where you are able to let go of your ego and understand that you are now part of a team and you are both in it together.

Miles Underwater ended two days ago and I think everyone is still a little shell shocked about how much we pulled off. How quickly we pulled it off and how efficiently we pulled it off. Brooke and I just wrote the script…it was a team of 50+ committed, talented and slightly insane people who breathed life into it and figured out how to pull it off. While I am mourning the end of production, it is truly only the beginning. This is where the work starts…editing, post production, marketing, distribution… and, in the meantime, Brooke and I have a bunch more projects on the docket.

A partnership seems like it’s just about the time it takes to flesh out a story and actualize the ideas onto a page when it fact it is much, much more.

Sports and writing partnerships and making indie films are very similar…you just have to find the right combination of teammates who won’t drop the ball, are able to score and want the win as much as you do.